I’m often asked if there’s a common thread running through my seemingly disconnected body of work book writing, software creation, mosaics, zebra’s stripes, etc, and there is a singular motif stemming from my background in visual sciences and my fascination with evolutionary processes.

After emigrating to the U.S. in the 1980’s I filed my first patent for a fully functional version of predictive text that is still found in cell phones today.  I also began creating software for an artificial evolution simulation in which animal ‘species’ competed for resources, reproduced, hunted and died. The purpose of the program was to find the “perfect” animal design.  But this never happened. No matter which animal species originally populated the simulation, the program inexorably evolved the same pattern of about 50 species — each with its own strengths and weaknesses.  Life, as it turns out, is just a super-complex game of rock-paper-scissors.

The realization that there was no such thing as optimal design led to my research in game-theory, and sparked the idea that humans (because they’re an ecosystem unto themselves) unconsciously optimize their personalities to suit their particular environmental and physical characteristics. And it’s no coincidence that these traits mimic the same fifty strategies found in the simulation. This led to the books, The Animal in You and Animal Attraction (St. Martin’s Press. The Animal in You was a best-seller and was translated into dozens of languages.  Featured on hundreds of TV and radio programs, its personality-test website receives almost two million visitors a year and has spawned hundreds of look-alike sites.

Employing the same core evolutionary algorithms, I began experimenting with self-evolving imagery, in which the software self–organized hundreds of unrelated images to create another image.  This began a journey of creating mosaics with photographs, stones, and found materials. But because the web was in its infancy, finding collections of related photographs was nearly impossible, except for photos of nude women!  The software needed a master image, and because the Bill Clinton/Monica Lewinsky story was unfolding, I chose Bill Clinton. After chunking away for a few days the software produced an image that was eventually purchased by Penthouse, who turned it into a giant pullout poster. (NSFW) 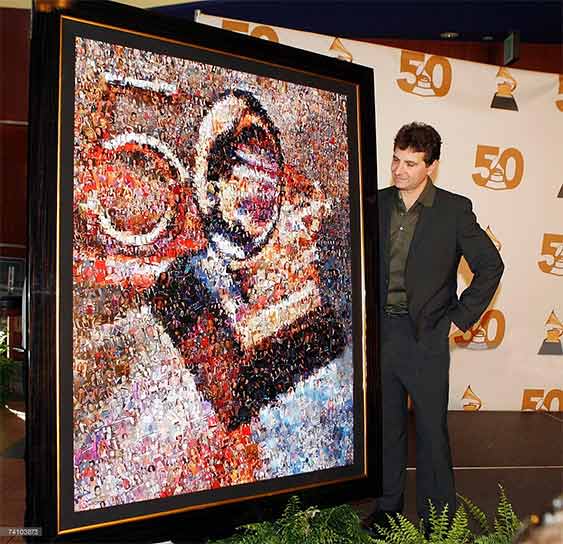 Perfecting the technique over the years led to dozens of public displays in museums, and institutions, and a commission as the featured artist for both Disneyland’s 49th and 50th anniversary celebrations (the 18 month Happiest Homecoming on Earth). The project included forty large scale murals including a tri-level mosaic and the world’s largest photographic mosaic, and Disney later commissioned an animated mosaic for their The Magic Memories and You. Later the Grammys chose me their featured artist for their 50th anniversary show and the Latin Grammy’s 15th anniversary.

The software even found a way to create multiple images within a single image depending on how the image was viewed.  While this process is different from dyadic imagery, both explore the idea that ‘what we see depends on where we stand, which led to the development of a forensic video algorithm used by California law enforcement. One day, a fortuitous bug revealed a world in which only moving things were visible. This turned out to be a significant discovery because it provided a wide-ranging hypothesis for how small-brained animals actually process vision, and resolved a host of other biological mysteries.

Questions and comments about my portfolio are welcome, and commercial issues should be directed to www.doubletakeimages.com