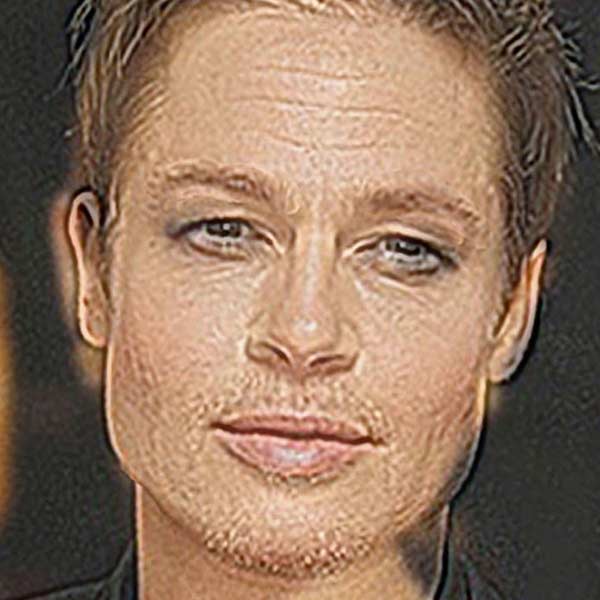 CLICK EACH PAIRING TO VIEW THE
FULL DYADIC IMAGE.

Check this out. It’s an experimental process that allows two images to be embedded into a single illustration without the need for special printing or 3D glasses. If you print the full screen dyadic image to the left (click each pair to view full screen image) you should clearly see the face of Glenn Beck or Brad Pitt. Put on your beer goggles, or step back twenty feet (squinting your eyes will help) and you will see a completely different person.

This process is based on the work Dr. Aude Oliva, a brain and cognitive scientist at MIT. While her work focuses on how the brain processes images, I have devised techniques that reduce visual noise to create a more commercial product. With its possibilities of personality juxtaposition, these images might be ideal for magazine covers and movie posters.

How Does this Work?

It’s a little creepy. But interesting. How can a single picture contain two distinctly different images?

The best way to understand the process is through an audio analogy. When listening to music with your ear close to the speakers your brain clearly hears, and focuses on, the high frequency components of the music (voices, lead guitars, high-hats, etc.). Since air and walls act as a high-frequency (low pass) filter by absorbing the high frequency elements, the further away from the music you are, the more the low frequency components will dominate. If you’re listening from across the street, all you’ll hear is the annoying boom of the bass notes.

When Einstein declared EVERYTHING to be relative (except the speed of light) he meant that in the realm of physics, distances, locations, and time can have entirely different values for different observers. Since the effects of relativity are only discernible at vast distances or extremely high speeds, life on Earth conforms comfortably to Newton’s predictably linear laws, in which the position and speed of the viewer plays no role.

Yet there are effects that can compromise this predictable world view. Our memories, for instance, work in much the same way as the dyadic images. Short term events tend to be remembered in high detail, sharp relief. At a restaurant with friends you tend to remember faces of people you’ve just met, or the color of the shirt you’re wearing, and the amount you just paid for dinner. However, as the event recedes your brain focuses on the larger, lower frequency events, such as whether the food was good and general ambiance of the evening.

The Gaussian Blur of History

One conclusion that can be drawn from these dyadic images is that events can have two conflicting yet equally accurate interpretations depending on the perspective of the observer. This is particularly true when it comes to the analysis of historical events. Consider the history of Europe, which is essentially the history of war. In an effort to explain the causes of the thousands of skirmishes, invasions and battles took place over two millennia, and in an effort to explain the causes of these wars, historians can legitimately come up with two diametrically opposed explanations.

For example, when the Georgian army occupied Rustavi in 1115 historians close to the battle understood that the purpose of the action was to free Georgia from the Muslims. But it is also undeniable that the promise of resources was a strong component. Similarly, while the Crusades may well have been motivated by a Papal desire to restore Christian control to the Holy Land; its not-so-small side effect would also have handsomely rewarded the Church’s coffers.

The first draft of history written by contemporary sources almost always focuses on the fine details, which what is commonly seen from ground level. The sweeping, broader strokes tend to remain invisible to close observers. As time moves on secondary writers digest the information of these primary sources, blurring the fine details of the actual events. However, commonalities remain. If, for example, four out of five original writers mentioned resource gains in their observations (even as a minor factor) it will almost certain to be carried along in their writings.

This second draft of history is therefore a type of low grade blurring of events with commonalities enduring and finely nuanced events receding. As subsequent historians employ these secondary sources, the blurring effect becomes even more pronounced. This process is very similar to the algorithm used to create a Gaussian blur in which each pixel is averaged with its neighbor, and the subsequent average used to create a new average. Therefore, modern historians can accurately conclude that the thousands of European wars were fundamentally driven by the desire for resources, while contemporaneous accounts can equally accurately surmise that they were fought for honor, population protection, or religious differences.

If our understanding of past events is necessarily softened through the Gaussian blur of history, it is not an inherent flaw in the process of historical study. It is an intrinsic characteristic of the fabric of history. In the same way that a single photograph can be described as having two distinct images – both of which are dependent on the distance of the observer – two historical events can be said to have distinctly different causes subject to the chronological position of the observer.