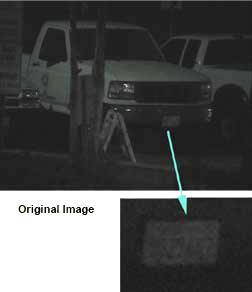 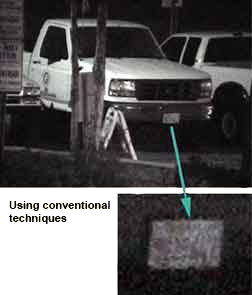 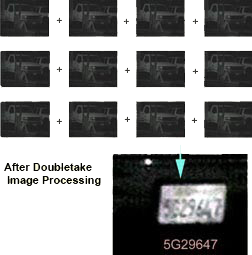 DoubleTake has created a proprietary system of video analysis to assist law-enforcement in the enhancement of video tape and film.

On many occasions surveillance cameras or amateur videographers recorded important information on videotape or film, but the recorded images are not clear enough to be useful as evidence or in the identification of a suspect.

These problems are caused by a variety of conditions including unwanted electrical video signals on the tape which are manifested as graininess, ghost imaging or picture static. These extraneous noises are induced by both internal and external sources such as power lines, motors, and fluorescent lights. Snow is also caused by low signal level due to poor light, ineffective signal processing, low quality videotape, worn recording heads, and over-enhancement of the signal.

Images captured on film rather than video do not display this characteristic nose, but at high magnifications, noise emanates from the silver halide grains in the film itself. These randomly positioned grains distort and hide fine details that are critical to the researcher. The following picture illustrates a typical example. This video image, recorded in low light with a consumer video camera shows an image of a truck whose license plate is completely illegible.

Conventional enhancement of video or film images incorporate procedures that range from simple contrast and brightness adjustments to more complex processes including gamma manipulation. There are also numerous techniques of making a picture look sharper, but they almost all involve methodologies that smooth images by averaging adjacent pixels. These techniques can be surprisingly effective but cannot add information to an image when none existed previously, and while these images may look sharper, there really is little improvement in the clarity of the picture.

After intelligently combining a number of frames and discarding noise and bad data, the software is able to discern the license plate on the bottom left.

This technique uses every pixel available on a security tape or film to discover nuances and detail to reveal a wealth of additional information. This proprietary enhancement software combines two systems of frame analysis — multiple frame averaging and intelligent noise reduction. Since both video and film involves the recording of many frames of the subject every second, information from successive frames can be accumulated and averaged to create a composite image of enormously improved resolution.

While any one frame may not have all the information required to improve an image, this data usually exists in part on successive frames. By analyzing the information on a number of frames and eliminating noisy components an entirely new image is created. Next, traditional methods are applied to enhance the final image to reveal the startlingly clear license plate shown above.

The process of averaging frames does in and of itself reduce the amount of noise in the final picture. A separate patent pending technique that removes intelligently removes noise without losing any data is the key to the DoubleTake process.