OUR TECHNOLOGY
The software behind the magic of a Doubletake mosaic has been in development for over twelve years and its sophistication and capabilities extend far beyond any commercial software.So why does this matter?When creating a mosaic image from a collection of drawings or photographs, there are trillions of possible ways that the image can be put together. But there’s only one right way! And if you don’t happen to get it right the image will look splotchy and pixelated.

Just because a tile happens to fit into a particular area of the mosaic doesn’t mean that it should be placed there. Perhaps another picture (that fits almost as well) could go there, and the other used to fill a different position.

So Doubletake’s software uses a unique approach. It doesn’t try and find the best possible placement for each individual tile. Using a process called artificial evolution, the software takes three random guesses at the best combination. The guess that looks the best (based on a proprietary scoring system) spawns three more guesses each slightly different from its parent. This organic process is repeated until no further improvement is possible.

The resulting mosaic is smooth, organic, and with graduated tonal ranges.

But the real work comes in the analysis and adjustment of the main image prior to building the mosaic. This is the true art of mosaic making, and it takes years of experience to understand how the main image will integrate with the component tiles. It is how Doubletake was able to create the high resolution mosaics for Disneyland’s 50th Anniversary, and enables it to make minimalist mosaics. 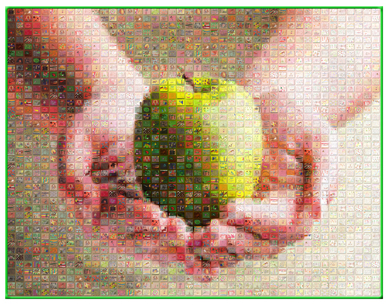 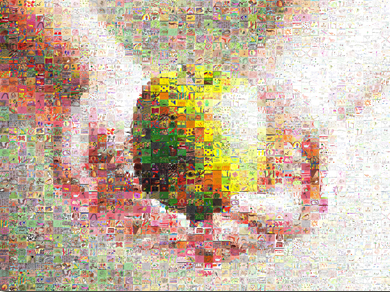 A BRIEF HISTORY OF MOSAICS
Mosaic art, or pittra per l’eternita (painting for eternity) has a rich history as one of the world’s most durable art forms. Examples from the ancient era have withstood the elements and centuries of mistreatment. Because of the dedication required by their artisans, many mosaics contain religious themes commissioned for cathedrals and mosques, but they have also been used as floors, walls and altars. It is commonly agreed that the Sumerian mosaics circa 3,000 B.C. are amongst the oldest, while the most famous is undoubtedly the interior of the entire dome in St. Peter’s Basilica in Vatican City.

Mosaics have commonly followed the artistic styles of their day. Some were decorative patterns but many were figurative and conveyed a message or told a story. Traditionally, the tesserae (individual pieces of mosaic material) were cut and arranged in shapes that helped form the contours of each image. In the ‘new renaissance’ of the 21st century, the merging of this ancient craft with modern techniques has brought about a stunning new art form with a history of its own.

PHOTOGRAPHIC PROCESS (1973)
1973 saw the arrival of some of the first photographic mosaic processes when Leon Harmon of Bell Labs wrote an article for Scientific American in November 1973, titled “The Recognition of Faces”. This portrait of Lincoln was included in the article as a demonstration of the minimal conditions to recognize a face.

This is just a very low resolution rendering (252 pixels) of a grayscale image of Lincoln. Each pixel is seen as a ’tile’, in this case a large square, in a shade of grey. Today this would be easily done in any graphics program on a computer by simply resizing the image down to 252 pixel total size, but Harmon may have used a photographic process to do this. Because of the low resolution, each pixel is a square tile. This image of Lincoln needs to viewed at a distance to see the face (or try squinting). The fact that Lincoln’s face is so well known makes its recognition easier.

GRIDDED MOSAICS (1970s)
In the 1970’s, American artist Chuck Close began working on mosaic paintings featuring small images on a precisely defined grid. Although he was clearly influenced by the impressionist movement, some of his work seems to be inspired by computer-generated imagery.

FULL TONAL-RANGE MOSAICS (1976)
Inspired by Harmon, Salvador Dali, created this famous image of Lincoln in 1976 . He used the same tiled image of Lincoln as Harmon but Dali made the tiles pictures themselves.

Notice how Lincoln’s face is made up of pictures with full tonal ranges; perhaps the earliest example of this technique. The nude taking up several tiles is Dali’s wife Gala and, if you look closely, you’ll notice that one of the tiles is Harmon’s grayscale image of Lincoln.

Note how Gala has been placed as an object over a background of tiles. Many of Dali’s works deal with some aspect of visual perception, so it is not surprising that after seeing Harmon’s tiled image he was to extend it in his own way. If not the first, this is certainly the most well known image made from other images. Dali worked from Harmon’s tiled picture and not the original picture of Lincoln.

COMPUTER MOSAICS (1990s)
Perhaps the earliest example of making a tile more than a single pixel came from an artist toying with Adobe Photoshop’s™ commercially available program. Photoshop™, a staple tool of digital artists, enables the user to manipulate pictures.

Perhaps the earliest example of a photographic computer mosaic is this 1994 image created by Dave McKean for Vertigo/ DC comics. 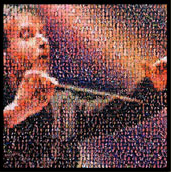 CUSTOM SOFTWARE (1996+)
Customized computer software that specializes in making mosaics wholly from tiled digital photographic pictures is a fairly recent arrival. Rob Silvers was the first artist to achieve wide commercial success with the process he developed while a student at MIT’s Media Lab, and his posters and limited edition artworks have sold for tens of thousands of dollars.

At the same time as Silvers was developing his process, Roy Feinson was creating mosaic software that specialized in ‘forcing’ photographs into mosaics. Unlike other photographic mosaic processes, in which the best component photograph is used for a specific location in the mosaic, Feinson’s process involves finding an appropriate place within the mosaic for every component, using algorithms borrowed from the emerging field of artificial evolution. Because this technique lent itself to special event mosaics, Feinson founded Doubletake Images which originally specialized in marathons. At each of these marathons, which featured up to 25,000 runners, his company captures over two million images and creates a mosaic poster. DoubleTake Images is now one of the largest producers of custom posters in the world.

In pushing the envelope of this technology, Feinson experimented with natural components to establish a link to the traditional artisans of antiquity. One of his first creations was this piece based on the cave paintings at Lascaux in France. Using unadulterated square-cut pieces of gemstones, carefully examined for color, texture and inherent flaws, the oldest art-form was recreated by the newest.

IMPRESSIONIST MOSAICS (1990s)
Roy Feinson pioneered the field in the 1990s, and because of its underlying similarities to 19th century impressionism he coined the term “impressionist mosaics”. Others have taken up the work as well, and in 2006, mosaic artists Nick Berg and Alan Roth made custom mosaics using this technique commercially available in marble and wood.

Most of the first impressionist mosaics were constructed out of semi-precious stones and were sold to private collectors. Impressionist mosaics are also ideal for architectural facades in which a subtle image can be coaxed from the building materials themselves.